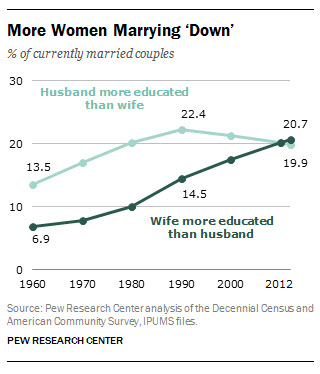 It used to be more common for a husband to have more education than his wife in America. But now, for the first time since Pew Research has tracked this trend over the past 50 years, the share of couples in which the wife is the one “marrying down” educationally is higher than those in which the husband has more education.

Among married women in 2012, 21% had spouses who were less educated than they were—a threefold increase from 1960, according to a new Pew Research Center analysis of Census data.

The share of couples where the husband’s education exceeds his wife’s increased steadily from 1960 to 1990, but has fallen since then to 20% in 2012. 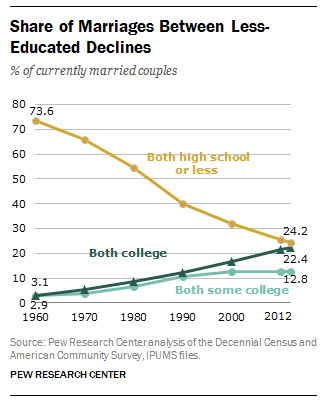 The primary reason for the decline in the share of married couples with similar education levels is that marriages between spouses with high school or less than high school education are much less common these days — the share is down from 74% of all marriages in 1960 to 24% in 2012. In addition, adults with high school or less education are much less likely to marry. The marriage rate among this group plummeted —from 72% in 1960 to 46% in 2012.

Just the opposite has occurred among college graduates. The share of couples in which both spouses have a college degree has risen steadily in recent decades. In 1960, only 3% of couples were in this group, the share rose to 22% in 2012. Marriages between spouses with some college education were on the rise until 2000 (from 3% to 12%), but have leveled off since then.

Welcome to Time and Life, a blog about research findings and thoughts on how people spend their time and how demographic trends are shaping our lives. I am a researcher who lives and works in Washington, D.C., United States. Please note that this is a personal blog. All thoughts and views expressed here are my own, and do not reflect those of my employer. Thank you for reading.