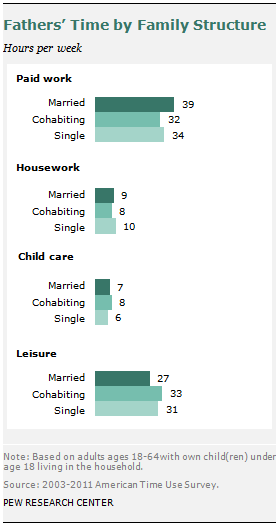 Single fathers are on the rise. Today, 8% of U.S. households with children under the age of 18 are headed by single fathers, up from 1% in 1960.

By definition, single fathers are not currently married and do not have a partner to help in raising their children in the household. In reality, single fathers often times are not “single”: about 41% of them live with an unmarried partner (the partner may or may not be mother of their children). If you are curious about the share for single mothers: about 16% of single mothers live with a cohabiting partner.

In this post I focus on the “real” single fathers who are not living with a partner and are the only parent in the household. I look at their time allocation at work and at home, and compare their time with that of married and cohabiting fathers, as well as that of single mothers. Most numbers are drawn from my analysis in an earlier report about modern parenthood.

Being mom and dad at the same time, one may think that single fathers carry a heavier workload than married fathers. However, the time diary data suggest that this is not the case.

If we add up the time in all three types of work (paid work, childcare, and housework), single fathers’ total workload per week is about 50 hours, which is higher than that of cohabiting fathers (48 hours), but lower than that of married fathers (55 hours).

Compared with married fathers, single fathers are less likely to have a college education (35% vs. 15%), and their employment rate is lower as well (89% vs.78%). Single fathers tend to have somewhat older children than do married or cohabiting fathers, which may help to explain why single fathers’ childcare time is slightly less than that of fathers in other family types. 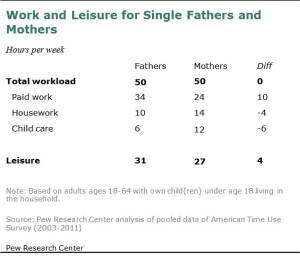 Still, single fathers manage to have four more hours of  leisure time per week than do single mothers.